After much planning, in 1974 Vin, Woody, and Jeff procured an old RCA 10-kilowatt FM transmitter from Paducah, Kentucky, a modified transmitting antenna, and other equipment of various types and vintage to establish Cache County's first 1 commercial FM radio station at 94.5 on the dial.  Our trio, better known as Aaron V. Farr, Bob Wood, and Jeff Jacobson, built the KVWJ studios (and even some of the equipment!) in a basement suite at 666 North Main, Logan, and placed the transmitter in a small wood building some 50 yards to the east, next to the mid-block miniature golf course.  A 60-foot tower supported the transmitting antenna.  The first two years of "J-94" were spent broadcasting easy listening music and news, switching later to rock music.  Though the old transmitter was constantly plagued with maintenance issues, KVWJ was an early attempt at making “a go of it” on the FM radio dial in Cache County 2. 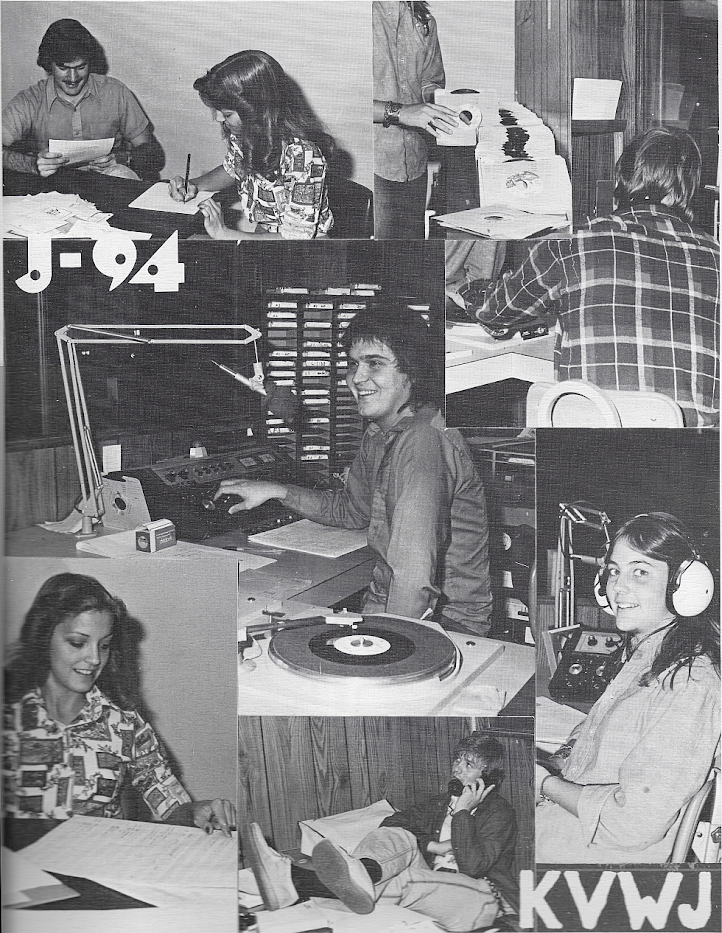 May 1st, 1978 brought a change of call letters from KVWJ to KJKJ, a change of ownership in Coloradan Randy Morrison’s Blue Jay Broadcasting, and a change of address moving to 21-B West Center Street in Logan 3.  A new transmitter helped those broadcast efforts, but finding success was still a challenge.  Imagine the sadness when about a year later, it was discovered the roof of the transmitter shack had developed a leak  resulting in a fire in the new transmitter!!  In spite of the day-to-day struggles, "Live 95" was a top contender for young listeners in Logan in a time when stand-alone FM stations were a rarity in small town America.  "Live 95" changed formats to “Music Country KJKJ" in 1980.  In 1982, Jeff Weber's Family Radio, Inc. purchased the station, changing the calls to KMXL and the musical format to more of a "hot" adult contemporary-Top 40 mix.  Even with several creative promotions4, "Magic 95" lasted for only two years when Cache Valley Broadcasting, parent company of KVNU and Northern Utah Community Television, bought KMXL and with another change in studio and transmitter locations, operated KVFM (now KVFX) with a variety of formats.  Today, the signal on 94.5 is licensed by Kent Frandsen's Cache Valley Media Group at 810 West Center in Logan. 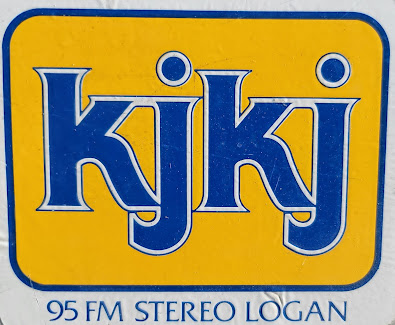 Alumni Records, Inc., owner of J-95, celebrates those heady days of early FM on the Cache Valley radio dial broadcasting in the spirit of serving the community and rediscovering the fun found in the experience of listening to the radio. Alumni Records honors the "legacy calls" of KVWJ by returning them to the air near where they were originally on the dial and with what one would have heard on the radio nationwide in the mid- to late-1970's.  We hope you agree!

P.S.:  Surprisingly, there are very few photos of KVWJ!  If you have any photos of J-94, Live 95 or Music Country, please contact us at kvwj95@gmail.com

1 There is enough coincidental information to place the honors of Cache Valley's first FM station on KPST, Preston.  As there were very few FM radios in Cache Valley after WWII, in order to gain listeners the station was operated on 1340 AM and has been a part of the south-east Idaho community since going on the air on September 6th, 1948.  The original FM antenna is still mounted to the KACH tower north-east of Preston.  That tower, at 402 feet, is and will likely always be the tallest man-made structure in the valley (see the photo below).

3 It was an odd coincidence that this address was chosen as Logan's first radio station, 10-watt KFXD, signed on and operated on 1460 AM from the SAME basement location in 1925.  The station was moved to Jerome, Idaho in 1927, then to Nampa in 1930 where KFXD still resides to this day.

4 No one ever caught the $10,000 trout.  Who knows?  It may still be swimming somewhere in Hyrum Reservoir with it's ID tag!

Once upon a time there was a boy who was bitten by the radio bug when he was about nine years old.  He had already learned the careful operation of high-end stereophonic equipment and recording basics years before that.  As he grew older, he dabbled in lighting, sound, film projection, and public address work through junior high and high school eventually landing a job in radio when he was 19.  It was the beginning of what would become a career in radio broadcasting.

In 1999, the Federal Communications Commission created a new class of radio service for localized radio which made ownership more attainable but even then, it was an additional fifteen years before the dream of owning and operating a radio station began to become a reality for the hero of our story.  Over time, a mountain of unwanted, lightly-used, fully-operable equipment had been acquired along with a sizeable collection of recorded music.  Part of this journey also included discovering the rich history of radio as a medium and the stories of radio lore in Cache Valley.

When a filing widow for new LPFM stations opened in 2014, Hyrum City was partnered with and an application for a construction permit from the FCC was submitted.  After further consultations, sleepless nights, and application revisions, a construction permit was granted.  Three years later on October 24th, J-95 KVWJ was officially ready to begin broadcasting and was granted license to go "on-the-air".  In 2021, the license of KVWJ-LP was transferred to Alumni Records, Inc., a 501(c)3 non-profit corporation created for the preservation of and education in the art of radio broadcasting while serving in the public interest of the communities of Southern Cache County.

The history of J-95 KVWJ-LP continues to be written... 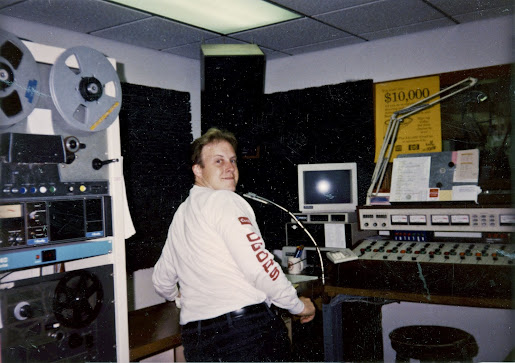 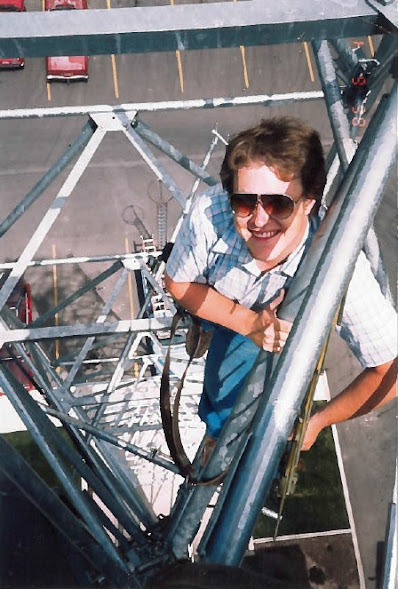 Popular posts from this blog

Radio for the South Valley 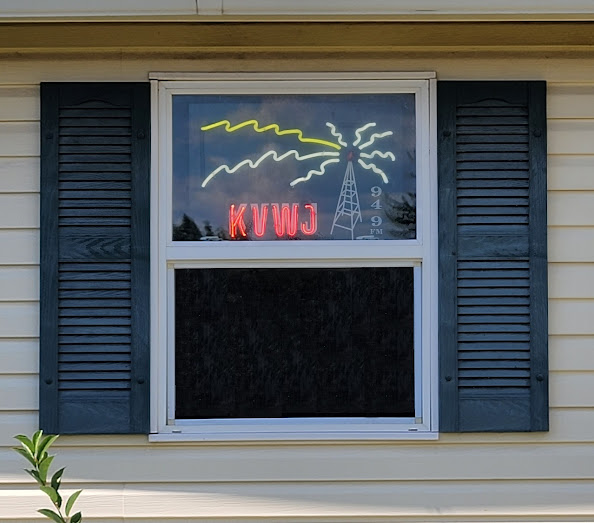 KVWJ-LP is a low-power, non-commercial radio station operated by Alumni Records, Inc. serving the residents of Hyrum and the surrounding communities in Utah's southern Cache Valley. Tune in at 94.9 FM!
Read more